Hebridean Islands each have their own character and the wild food gatherer's basket will vary from Isle to Isle. I recently travelled from South Uist, where trees are few and far between to Tiree via the Isle of  Barra, which has lots of trees and bushes and so, in autumn, a cornucopia of autumn berries.
The Isle of Tiree unlike The Uists, was a bramble free zone but ditches were amply banked with mint and a second season of watercress. (N.B.Watercress foraged where sheep and cattle graze must be cooked before use to avoid liver fluke.) Shellfish was in abundant supply and marine algaes plentiful. I foraged : sea lettuce, velvet horn, carrageen and sugar kelp for Tiree's food festival. I chatted about cooking with fresh ingredients, coping with weather disrupted ferry deliveries over the winter months and of course,  foraging seaweed. 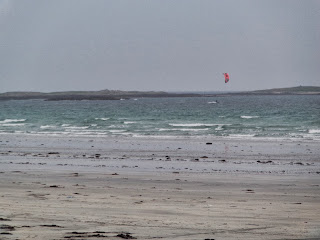 Tiree is a beautiful island with numerous bays and white sandy bays — a surfer's haven. It is reported to be the sunniest place in Britain. The sun certainly shone during my visit.


I travelled on to the South West of England where the gorse was blushing a second bloom and Cornish seawater a tad warmer.


Cornish carrageen spied on one beach is certainly less shy than its Hebridean counterpart. I found it in rock pools higher up the lower shore than on The Outer Hebrides.

I meandered home to my Island via mainland sloes, quince and sea-buckthorn and found that the sea lettuce madeleines in our Outer Hebridean kitchen cake tin were still moist.

This Sea Lettuce Madeleine recipe is taken from The Forager's Kitchen 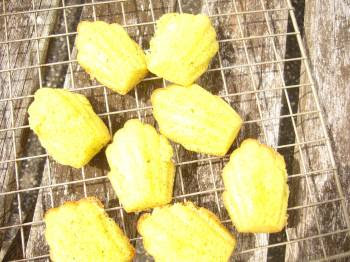 What to forage & find:

Extra flour and butter for Madeleine trays
Sea Lettuce dried (Approx 10cm x3cm)
125g caster sugar
4 eggs
Small lime, finely grated zest
125g plain flour, sifted
Tsp baking powder
125g butter, warm (melted)
Tbsp icing sugar
Oven 220°C Gas7
1. Prepare the Madeleine trays by brushing them with melted butter and lightly dusting with flour. Turn the tins upside down and shake out excess flour. Set aside.
2. Break the Sea Lettuce into small pieces and put it in the food processor with the caster sugar. Blend briefly so that the sea lettuce is well mixed into the sugar.
3. In a bowl whisk the eggs, sea lettuce sugar and lime zest together until light and thick (the whisk leaves a trail in the bowl when lifted.)
4. Fold in half of the sifted flour with the baking powder.
5. Drizzle half of the warm, melted butter around the edge of the mixing bowl and gently fold it in. When the ingredients have combined repeat with the remaining sifted flour and melted butter. Chill in a fridge for an hour. (This gives the mixture its dense, mousse like consistency).
6. Just over half fill the prepared Madeleine tins (do not fill to the brim the Madeleines will expand) and then bake for about 10 minutes until the Madeleines are golden and speckled with sea lettuce green.
7. Give the tins a good shake to help to remove the cakes from the tins. Turn on to a rack to cool. Dust with sifted icing sugar.
You may like to add a pinch of finely ground sea lettuce to the icing sugar used to dust the cakes at Step 7. Alternatively, for ease, use caster sugar if you have made Sea Lettuce sugar.