Researching a book on British seaweed may have steered me away from sushi but I am easily distracted. I couldn’t resist further nosing into: why Koreans serve brown seaweed soup to celebrate a birthday. Postpartum mamas are also served copious amounts of seaweed soup, whilst in confinement. Perhaps the iodine is thought to help lactating mothers or seaweed has properties attributed to regaining a pre pregnancy figure. Scientists would however appear to be anxious over levels of iodine consumption but as is often the case, scientific data is inconclusive, not least because the iodine content in soup (from the seaweed)  varies. While I've noticed seasonal culinary differences when cooking with marine algae I suspect there is a variation in nutrients too. I’m left wondering whether the iodine content is higher in the birthday soups of summer babes.

Here is a link for Korean miyyeoguk  (seaweed soup) if you like the idea of making it. There is plenty of giggling chat beyond the soup for those who, like me, are keen to be sidetracked. Stick with the video for a creative kelp facial mask - it wouldn’t look out of place at Hallowe'en. Now there’s wicked kelp thought. Sadly at room temperature it’s greenish brown not black in colour.

I’ve used dulse in soup recipes in The Forager’s Kitchen: it thickens and is of course rather magical when cooked because it changes colour from ruby port red to green. This week however, I’ve created a new recipe for my seaweed book, which is loyal to the delicious, simple flavour of dulse. 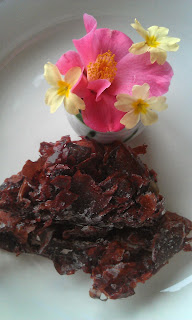 Increasingly, I realise that we need to be more discerning when cooking with Marine algae. Species is important and seasonal taste may vary.

Posted by Fiona Bird at Saturday, September 21, 2013 No comments:

I was sad to have to miss the seaweed events at The Botanics this weekend but delighted to see that The Forager's Kitchen was mentioned in today's Scotsman. However my seaweed luck was in locally, when I spied a poster for an open invitation to the Blackland Project at a Grimsay Croft.
My non scientific understanding of the Blackford Project is that it is a partnership between Uist Crofters and the University of Edinburgh, to determine whether there is any benefit in the inclusion of seaweed as a fertiliser in the old ridges (lazy beds). The project is specific to the East Uist coast using Achophlum nodosum (Bladder wrack) contrasting deliberately with the kelps used on the West Coast (The Machair).
I learnt that both East and West coast seaweeds are deemed to be low in phosphates and nitrogen but high in sulphur. Somebody has already asked me why I eat seaweed, when it is purported to be full of arsenic, so I suppose a good dose of sulphur cyanide style, on the garden is par for the course.  Seasonal nutrient variation  has not as yet been analysed. Storm wrecked beach bounty would appear to determine when seaweed was collected. The Blackford  Project has compared lengthening the time that seaweed is left to rot  (four months), which is considerably longer than the traditional four-six weeks of the historic Crofter.
My interest is in the 'taste' of seaweed and its seasonal variation but I appreciated the time to chat with kindred spirits. I'm not sure any of us could really give clear didactic advice, there would appear to be much to learn...
I enjoyed chatting to Raghnall MacIain  who employs local folk to hand cut Achophlum nodosum (bladder wrack). He dries it in Sollas (North Uist) over wood-chips at a very low temperature which preserves the seaweed without temperature degeneration. A note for the cook here is that long and slow drying is best - seaweed is a slow food.
I'd spied crofters cutting the 'stipe' (stem) from storm damaged kelp and somebody had mumbled something about its export to Brittany. I've since read that the French have a seaweed festival 'Fete du Goemon', which reenacts the traditional ways of Breton seaweed harvesting ...I  can't help wondering if that beach has a nickname to compare with Benbecula's 'Stinky Beach'.
Enough of this rot chat.
My aim is to encourage folk to cook with fresh or dried seaweed - and I endeavour to harvest it, when it is nutrient packed because the seasons make a difference.

Here are some photographs from the most informative day which took place at the most delightful Mary Norton's croft.

Lunch was local and delicious - hot smoked salmon sandwiches. In true Outer Hebridean food style I picked up Hebridean sea salt and yet more of those award winning seaweed biscuits from Stag Bakeries en route back down to South Uist; where a green and red seaweed birthday cake awaited my long suffering, seaweed guinea pig and favourite South Uist Dr....  even a Seaweed Birthday Cake needs the odd smartie. 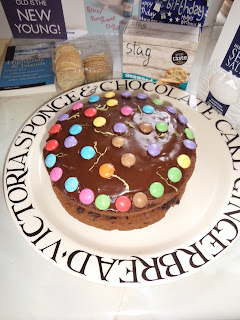 Posted by Fiona Bird at Saturday, September 14, 2013 No comments: 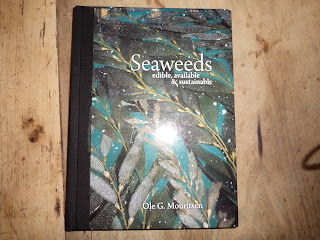 Ole G. Mouritsen is a scientist and Professor of Biophysics at the University of Southern Denmark. Be impressed but rest assured this book is not one that will be pushed to the back of a highbrow academic library shelf; it is a delightfully easy read and is beautifully illustrated with superb photographs. Mouritsen charts the history of seaweed and Brits will enjoy mention of the fact that Dr Kathleen Mary Drew Baker (1901-57) discovered a property of porphyra (more familiar to us as laver or nori), which enabled it to be cultivated. Indeed the Japanese hold Kathleen Drew Baker in high regard referring to her as the ‘Mother of the Sea.’
Understandably there is a heavy focus on the cultivation of seaweed in Japan but as lovers of nori and sushi this is to be expected. They might not however, have known without reading this book that harvesting carrageen (a red seaweed) in Zanzibar enables mothers there to support their families.
“Seaweeds are marine algae” heads many a page as Mouritsen seeks to direct the reader’s understanding of the colloquial term ‘seaweed’.

There are chapters on Seaweed folklore, its technical uses (from gunpowder, soda and early glass making to biofuels) and its use in medicine, health care and cosmetics.

There has to be something for everyone in this amazing collection. The recipes are clearly written and the ingredient lists not extensive. You could simply take your tried and tested Guacamole recipe and add 5 tbsps of dried sea lettuce or dulse or even try the same with Mayonnaise. Come to think of it I have such a recipe in the Forager’s Kitchen. My book is not academic but in neither book do the recipes require a science degree. A professor who is an accomplished cook, is a rarity but one who has the foresight to write for an international readership while keeping measurements accessible, must be nigh on unique.

I love Mouritsen’s book. In this kitchen it certainly won’t be collecting dust, metaphorical or otherwise, but it might get enhanced by splashes from slimy wet seaweed and other ingredients. It’s on my list of “don’t lend to anyone unless they are your best friend” editions.
I highly recommend that you buy this book.

I paid for this book although Ole G Mouritsen has ping-ed an email from Denmark to the Outer Hebrides “It is a great experience to get into contact with people with whom you share a passion ('of cooking with weird things´)”.  I have to adore an author who bothers to quote me in an email.

Posted by Fiona Bird at Thursday, September 12, 2013 No comments:

The Postie on South Uist arrives mid afternoon, today he delivered the first dried seaweed packages for recipe testing. They came from Bod Ayre and Sea Veg.
The  Victoria Sponge isn't a completely random addition, it contains home dried South Uist sea lettuce. If you like this idea, check out the recipe for sea lettuce madeleines in my book .
The book by Annie Dillard arrived in the post too. It is a complete mystery to me and I would love to know, to whom I need to send a thank note...  a shack on the dunes sounds most appealing. I hope that the heroine cooks lots of seaweed, I'll let you know.

I am happy to review all seaweed products. I will give my honest opinion and will not accept any payment for said review. If products are given free of charge, I will note this in any blog. If you would like me to consider a seaweed product, please email hebrideanforager (at) gmail.com
My aim is not to compare and contrast products, each product / producer will be blogged independently. I hope that this blog will make people aware of the versatility of Marine algae and become a useful resource for those interested in seaweed.

I cook with seaweed on a daily basis: it adds flavour (umami), can set and/or thicken, is easy to use and most importantly, is simply delicious, and this is all before the nutritional properties of seaweed are even mentioned.

Posted by Fiona Bird at Tuesday, September 10, 2013 No comments: